The transport system in Kyrgyzstan

The transport system in Kyrgyzstan is one of the best-developed ones. The movement in Kyrgyzstan is right-hand (steering wheel on the left).
The most suitable way to travel around the country is by bus, taxis, and taxis. You can ride them both in large cities and between cities. Often, this is the only way to get to the right place.
The bus fleet of Bishkek was updated in 2009 and today is represented by quite comfortable buses.
Taxis operate in all cities and towns of Kyrgyzstan. Tariffs are initially very low, it is recommended to call a corporate taxi, and not a private trader (more comfortable and safer).
By the wat road network is poorly developed, good asphalt roads go from Bishkek to Osh, Almaty, and Balykchy, and a good asphalt road and the road to Torugart in the direction of China are also laid around Issyk-Kul Lake. In winter, the movement is hampered by drifts on the passes. The roads are either broken asphalt or graveled or just unpaved roads. However, mountain roads are usually specially converted private trucks (crews) drive.
Many places can only be reached by helicopter, on horseback or on foot.

International airport “Manas” is located near the capital of Kyrgyzstan – Bishkek. Domestic flights to Osh, Batken, and Jalal-Abad are operated from Bishkek.
Main part of the country’s fleet is the old, leased Boeing-737 or remaining from the time of the USSR – airplanes.
Air Bishkek (www.air.kg)
Air Kyrgyzstan (www.air.kg)
Avia Traffic (www.aero.kg)
Sky Bishkek (https://skybishkek.kg)

Passenger train message was kept only in the north of the country, near Bishkek. From there, there are three long-distance trains to Moscow, Ekaterinburg, and Novokuznetsk, and there is a suburban connection to the west, to Kazakhstan (in the direction of Merke, before traveling 3639 km), to the east (to Tokmak station) and a local train to Rybachye (Balykchy) on the lake Issyk-Kul.

Since there are very few navigable rivers in the country, only small private boats and boats are present. On the Issyk-Kul lake runs the ship.

As a rule, rental cars are provided without a driver. At the request of the tourist can rent a car with a driver.
To get a car for rent you will need the following documents:

Kyrgyz Tourism  Offers regular shuttle busses for the most popular places for summertime.

The bus goes from Bishkek to Song-Kol. It is an express bus. On the way is available to visit Burana tower for short sightseeing. Arrival in Song-Kol for late lunchtime. At your disposal accommodation in the yurt camps. The road takes about 5 hours driving. The bus stays at Song-Kol one night and returns the next day after lunch back to Bishkek.

The schedule is agreed and the total cost of the price for the minivan is 10 000 soms. The van has 6 seats and the price can be shared among the passengers.

Train route Tashkent – Bishkek – Balykchy – Bishkek – Tashkent will run every week on Thursdays from the capital of Uzbekistan (Tashkent) and arrive on Friday in Bishkek and then go to Balykchy , and Saturday back to Bishkek further to Tashkent . On Sunday it will arrive in Tashkent.
The train is designed for about 300 passengers, in its composition – 7 compartments, 3 economy-class and one car-restaurant. If there are more people willing to go on a trip, additional cars will be attached to it.
Fare:
In the second-class carriage 2500 soms (35 USD) per person.
In compartment – 3378 soms (50 USD) per person.
In the luxury car – from 6432 soms (90 USD) per person.
In its final point – the town of Balykchy on the coast of Issyk-Kul – the composition comes in 24 hours. Not so fast, but comfortable and safe.

The state enterprise “ Bishkek Bus Station” takes orders for collective and tourist trips on comfortable buses to any locality of the Kyrgyz Republic and neighboring countries.

How to get to the western bus station?

Bus schedule
Prices are per person 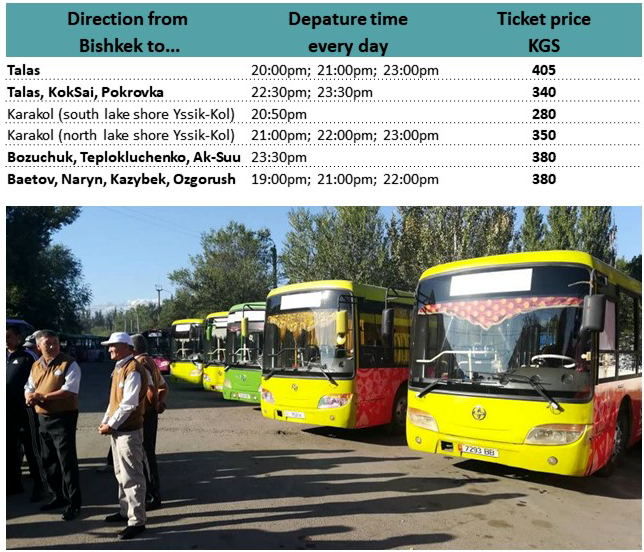 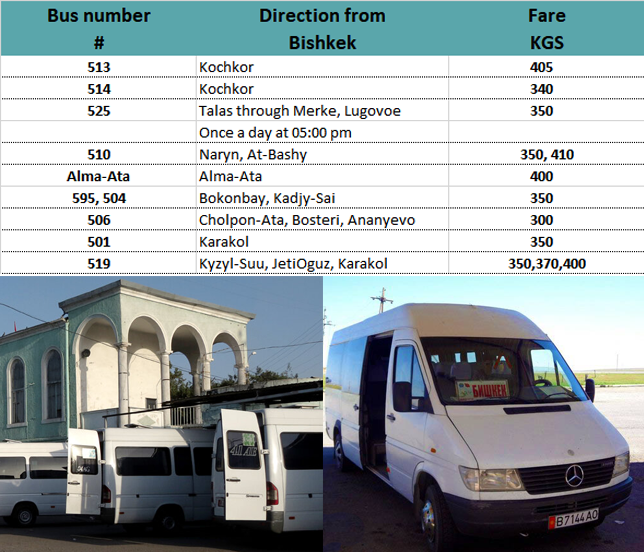 Rules for using the services of the Bishkek west bus station

Mode of operation of the Bishkek bus station around the clock.

Regular passenger and baggage transportation is carried out in accordance with the consolidated schedule located on the 1st floor of the bus station building.

Bishkek bus station includes the main building of the bus station and the technological area for transport and passengers.

– administration of the bus station;

– the ticket office for ticket sales and payment of baggage;

– room of mother and child;

In the technological area for transport and passengers are located:

– turning area and parking of buses;

– room of mother and child;

Current and pre-sale tickets for travel and baggage transportation to international, intercity and suburban routes are carried out by all bus stations in all directions.

The sale of a ticket may be refused if the capacity stipulated by the vehicle’s design is exceeded, or if the carriage is carried out only with the provision of a seating area in the absence of free seats.

Pre-sale is carried out 5 days before the departure of the bus by long-distance route, 20 days along the international route according to the approved schedule. For pre-sale tickets charged a fee.

The fare (tariff) is set by the carrier, agreed with the State Department for Antimonopoly Policy under the Ministry of Finance of the Kyrgyz Republic.

The passenger has the right to refuse to travel in the bus international, intercity and suburban routes, with the possibility of ¬ the cost of the ticket and baggage rotates before the bus leaves, to receive money paid for it, including the commission and country ¬ Hova fees in the following cases:

in case of late or delayed departure of the bus by more than 1 hour provided by the schedule;
when a passenger is provided with a seat on a general bus instead of a bus with soft folding seats for which a ticket is sold to him;
when not providing a passenger seat, specified ¬ on the ticket;
in all other cases of failed transportation due to the fault of the Carrier.

– In case of returning the ticket to the ticket office two hours before the departure of the bus, get back the fare, the transportation of baggage minus the fee;

– In case of returning a ticket less than two hours before departure of the vehicle, get back the fare, baggage transportation minus 15% of their cost and commission fee;

– If it is impossible to continue the carriage of a passenger to his destination for reasons not dependent on the carrier, get back the fare, the carriage of baggage is proportional to the undisclosed distance;
– Return the ticket to the cashier before departure of the vehicle and get back the full fare, baggage transportation in the following cases:

a) cancel the departure of the vehicle;

b) the delay of departure of the vehicle for more than an hour;

c) providing a passenger with a seat in a vehicle with fare at a lower price than in the vehicle for which the ticket is sold to the passenger;

d) failure to provide the passenger with the seat indicated on the ticket;

– In case of consent to travel on a bus with payment of travel at a lower price, get the difference between the amount paid and the amount due for travel, transportation of baggage;

6. Rules of boarding passengers on the bus.

6.2. Passengers are informed about the beginning of the landing through a speakerphone.

6.4. When boarding, control is exercised over the correctness of payment by passengers for travel and baggage.

7.2. Help Desk provides free services to provide reference information on the work of the bus station, as well as on flights departing from the bus station.

– written information about the fare,

The passenger is obliged to pay the fare at the ticket office of the bus station. Confirmation of fare payment (conclusion of a passenger carriage contract) is a ticket. Ticketless persons are not allowed.
Persons who have dirty clothes or clothes maracuja other passengers or the seat of the bus, as well as in a state of alcoholic or drug intoxication, posing a threat to society and violating public order are not allowed into the passenger compartment of buses.

Ensuring the integrity and security of hand baggage is the responsibility of the passenger.

Luggage and carriage as a part of hand luggage are not allowed to be offensive and flammable, explosive, toxic and other dangerous substances, cold and firearms without covers and packaging, as well as items (objects) that pollute vehicles and clothing of passengers.

Loading and unloading of baggage transported in the luggage compartments of vehicles are carried out by the passenger.
Claims arising in connection with the carriage of passengers and baggage or the provision of vehicles for the carriage of passengers and baggage are presented to carriers at their location. Claims arising from passenger service at the bus station are presented to the bus station administration or by writing to the book of complaints and suggestions, which is located at the senior cashier and in the control room.

Passenger buses on suburban routes are allowed to carry one child under the age of 7 inclusive for free. For an adult passenger, there are several children under 7 for each child except one, as well as for children over 7 years old, the fare is charged at full fare.