Recently winter tourism has been booming in Kyrgyzstan. The geography and climate of the country are ideal in winter for skiing on the mountain slopes and everyone will find for themselves interesting and varied routes in many categories.
The ski season starts from December to March. Fans of extreme types of skiing can ride on the wild slopes of the Suusamyr Valley, the Tien Shan Mountains and in the vicinity of the Jyrgalan Valley.

Kyrgyzstan is becoming the lovely place for a backcountry ski tour, freeride, heliski 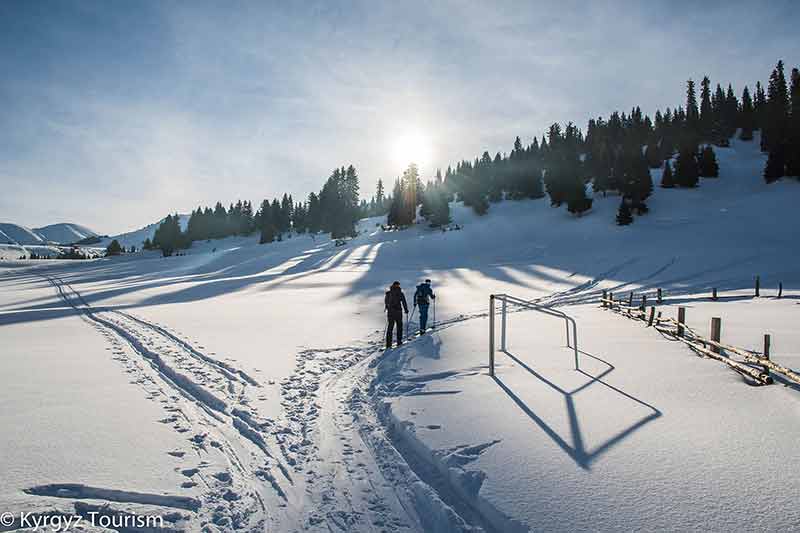 The Kyrgyz Republic is located within the Tien Shan and Pamir-Alai mountain range systems. The highest point is Pobeda peak (7439 m), and the lowest – 480 m above sea level – the cross-border crossing of the river. Naryn. About 93% of the territory is located above 1000 m, 85% – more than 1500 m and about 42% above 3000 m above sea level.
The variety of climatic conditions and landscapes of mountainous Kyrgyzstan can be combined into four climatic zones:
– The valley-piedmont belt (up to 900 – 1200 m) is characterized by hot summers, moderately cool and snowless winters with a large deficit of precipitation. The sums of accumulated positive temperatures in this zone are 3600 – 4900ºС.

– The nival belt (from 3500 m and above) is characterized by a harsh, very cold climate. This is a belt of snowfields, rocks, glaciers, a belt of moisture accumulation. Even in the lower part of this belt, the average July temperatures do not exceed 4 – 7 ° C and January temperatures drop to 19 – 22 ° C of frost. The sums of accumulated positive temperatures here do not exceed 600 – 800ºС.
Only about 20% of the republic’s territory belongs to areas with comfortable living conditions. The overwhelming majority of the population constantly lives in this zone, and economic activity is mainly concentrated here. About half of the republic’s territory is estimated as areas of uncompensated discomfort. Only mining enterprises are constantly operating in this zone, other economic activities are seasonal.
Winter in Bishkek is mild and moderately warm. The first frosts begin on average in mid-December, and the reverse transition through 0 ° C occurs in the second half of February. The coldest month is January (–2.6 ° C). Against the background of relatively small negative temperatures in winter, intensification of the Siberian and Asian anticyclones, frosts can occur with a decrease in air temperature to –34.0 ° С (February 1951). Moreover, thaws up to + 15 ° С … + 20 ° С is often

Feel free to contact us for more information and to organize the winter ski tour in Kyrgyzstan. Emai: info@kyrgyzstan-tourism.com

WHY TRAVELING IN KYRGYZSTAN DURING WINTER IS A GREAT IDEA?

Traveling to Kyrgyzstan organized and conducted on the framework of [...]

7 Things To Do Before Your Kyrgystan Ski Tour This Year.

Already thinking about the holidays? If you’re planning a ski trip in [...]