On a cloudy but crisp morning, Talgar, a 45-year-old eagle hunter, came to meet us. It was a privilege to follow and document a wild hunt alongside the eagle hunters. Following behind Talgar’s second-generation Volkswagen Golf, we were led along an unpaved road to a nearby foothill, less than 10km away from Bokonbayevo.

At a distance, we saw four riders on horseback slowly trotting towards us, a snow-capped mountain rising high behind them, as they closed in, we saw the eagles, huge and majestic. Their carriers dressed in Ak Kalpak, a Kyrgyz white hat, offset by modern sports jackets that felt anachronous to my preconceptions. Nur-Sultan, a 24-year-old man, was one such hunter who rode in to meet Talgar and us. A former eagle hunting champion at the 2014 World Nomad Games, he has won numerous awards as an eagle hunter and archer, and according to Talgar, his brother-in-law, “he has a neck for nomadic activity,” 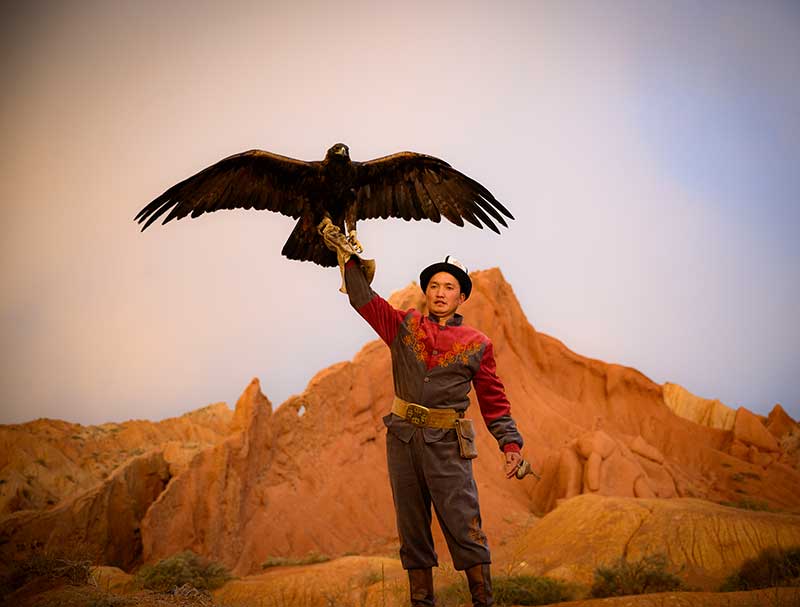 When the riders arrived, everyone greeted each other with laughter and jokes and began to plan their hunting strategy. As the hunt began, Nur-Sultan surveyed the landscape, throwing rocks to scare potential prey from the few bushes available. Their golden eagles, Kyrgyzstan’s largest bird of prey, are capable of catching small to midsize prey like hares, foxes, jackals, and in rare cases larger prey such as teenage wolves and full-grown deer. Arsan, under the guidance of Talgar, waited to set their eagles loose. We were in hunting season, which usually falls between October till February when the ground’s layer of snow allows the hunters to spot fresh footprints, and the eagles, who prefer colder temperatures, can operate best.

Hunting can be sporadic at best, and yet it took less than an hour to witness our first piece of the action: Nur-Sultan spotted movement underneath the bushes and called the hunting party to move towards the other side of the hill, shortly before a jackal was spooked by the Taigans and bolted for escape. Talgar released his eagle immediately after spotting the jackal and in perfect synchronicity their actions swift, precise, and complimentary. Unfortunately for us, a second eagle was released by mistake which caused a collision between the eagles and the jackal escaped. 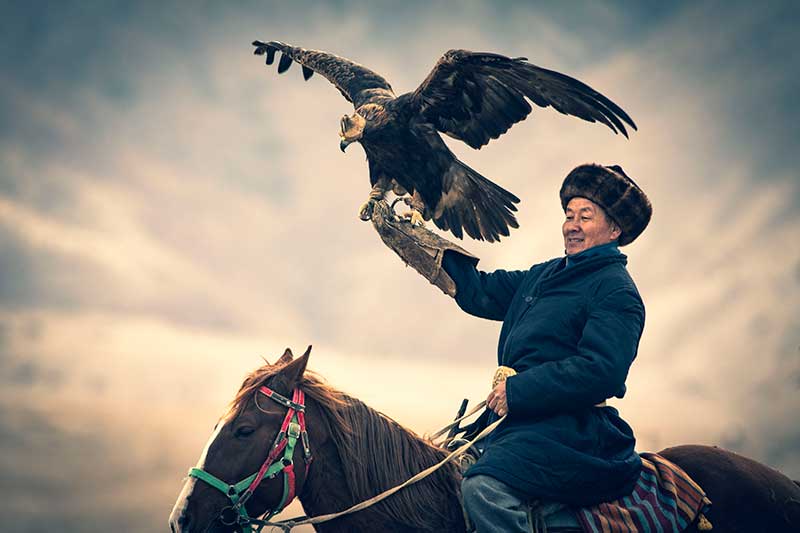 The failed attempt didn’t upset the hunters, unsuccessful hunts can be common but they do their best to respect tradition and nature. Trekking through harsh terrain the hunters remain physically fit. “We don’t do this to be cool. You have to love nature and your animal to trek long distances. It is not an easy way of life,” said Talgar. It was a privilege to witness these hunters in their element.

Jety-Oguz Gorge legend retells us the story of formation of red [...]