The Silk Road is the only land route, from the end of the 1st century BC, bound Eurasia with a thread of trade. Thanks to this, all peoples living between China and Rome become participants in this great diplomacy. The great Chinese traveler Zhang Jian in the 2nd century BC managed to overcome the Alai mountains, went down to the Ferghana Valley, and reached Parthia. Thanks to his journey, the first written sources about the ethnonym Kyrgyz were compiled.

The main valuable commodity, of course, was silk, which gave the name to this transcontinental path in the 19th century. Until the middle of the 1st millennium BC, when silk began to be produced in Central Asia and Iran, it was produced only in China. It was not just a commodity, but also an important detail of Chinese diplomacy. To receive Chinese silk as a present was a sign of excessive respect from the Chinese. In addition to silk, jewelry, precious metals and stones, agricultural goods, utensils, weapons, clothes, fabrics, rare raw materials, and traditional medicine were transported along the way. Not only sales but also control over the path provided very good incomes, for which the Asian states fought.

To explore the modern Silk Road possible by joining our tour.

Kyrgyz and the Silk Road

At the end of the 1st millennium BC, the Hunnic authorities took control of the northern routes, influencing South Siberia and Central Asia. This is how Chinese architecture, lacquerware, silk, bronze mirrors, jade pendants, Han coins, Hun ceramics, clothing, and weapons fall into these places. At the turn of antiquity and the Middle Ages, Kyrgyz appeared. Being a part of the Turkic Kaganate, the nobility controls the trade on this section of the road. In the Turkic monuments of Sayano-Altai, there are silk clothes, silver vessels, jewelry, belts, harnesses, weapons, jewelry, mirrors. The strengthened Kyrgyz state in the first half of the 7th century establishes direct diplomatic and trade contacts with the Tang empire. The first diplomats to the Kyrgyz state from the Chinese were sent in 633 and continued for more than a hundred years. According to written sources from 643 to 747, eleven Kyrgyz embassies were registered. Embassies were honored at the imperial court and generously awarded. The evidence is found in the Minusinsk hollow: highly artistic mirrors, gilded coins of the Tang Empire. Kyrgyz exported valuable furs, horses, musk, and white poplar to China. The Chinese greatly appreciated these goods. In 840, the finest hour of the Kyrgyz came with the conquest of a vast territory, the time of the Kyrgyz Khanate came. Preserved information about the three embassies in 843. Tile from the marble of 866 with the name of the Kyrgyz Ajo (king)  from the Chinese emperor found. In addition to Chinese sources, we learn from Muslim sources about trade relations with Central Asia, Afghanistan, Sassanid Iran, East Turkestan. Kyrgyz provided security along the Great Silk Road. For example, Tibetan merchants were waiting for Kyrgyz escorts in the country of Karluks. After assimilation with the cultures of neighboring nations, a general nomadic character appears in an attempt to urban development, agriculture, and the introduction of monetary circulation. The Kyrgyz were the last people of Turkic origin, dominating in Mongolia. In 924, the collapse of the Kyrgyz state changes the whole area.

The diversity of routes

Medieval Kyrgyzstan crossed 3 branches of the Great Silk Road: 1) Pamir-Alai Path. From the Mediterranean Sea, crossing Iran, caravans passed through the city of Merv. Through the city of Termez, to the Alai Highlands, the passage Irkeshtam, East Turkestan, then to China. 2) Ferghana Valley Path. From Merv through Bukhara, Samarkand, Khojent to the Ferghana Valley, the cities of Osh and Uzgen. The path to the Central Tien Shan in At-Bashi – Tash-Rabat Caravanserai, from there to eastern Turkestan or to Lake Issyk-Kul, Barskoon. 3) Chuy Path. From Samarkand to Tashkent, to the Chuy valley to Navekat, Suyab, Boom, Issyk-Kul Lake, Barskoon. From there, the road passes through the San Tash pass to Mongolia and South Siberia. The second way through the Zhuuku pass to the Central Tien Shan, the Bedel pass to East Turkestan, then to China. 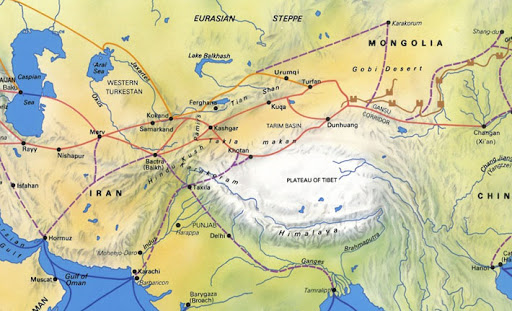 The map of the Silk Road

How did the caravans go?

Clearly passing through the Tien Shan and Pamir-Alai mountains was not easy. Caravans and merchants struggled to overcome mountain trails and passes. Camels moved slowly about 25-30 km per day. No more than 300-350 kilograms of cargo could be loaded onto one camel. Caravans were very long, in some up to 10,000 pack animals. The local infrastructure for the adoption of caravans gradually prepared. Bridges, roads, caravanserai, cities-Dzhul, Suyab, Navekat, Balasagun, Barskoon, Tash-Rabat, Osh, Uzgen. In the 7-8th century, the city of Suyab was famous, it became a commercial and cultural center. According to research, many peoples with different cultures and religions lived in Suyab. The city of Mersmenda in the Osh region was famous in the 9-10th century, where the best rhodium, sabers, iron, swords sold there.

In the 8th century, the first Turkic money appeared, a copper circle with a hole in the center, it is believed that they cast in the city of Suyab.

The legacy of the Silk Road

The Mongol invasion in the 13th century, the geographical discoveries in the 14th century rapidly led to the decline of trade along the Silk Road.

There are no analogs to the Great Silk Road in the development of economy, culture, diplomacy, and politics. The role of the Silk Road in the history of the Kyrgyz is enormous. Thanks to him, a lot of historical data and sources have been preserved. Medieval Kyrgyzstan played a significant role in international trade.

More about the Silk Road you can find at the website of the UNESCO.

The Shygaev Museum of Modern Art in Kadji-Sai The hidden jewel on the [...]

Kyrgyzstan The Kyrgyz Republic – formal name of the country, situated [...]