The Flag of the Kyrgyz Republic

The Flag of the Kyrgyz Republic showing the symbol of “Tunduk” – the wooden top of the yurt, inside of the Sun on the Red Field.

The flag is a sacral symbol of national safety. Consequently, it is important to choose symbols for the country. It had not to be regional, political, or religious. First of all, symbols need to unite people, show the life and history of the nation. Symbols give positive attempts for future developments.

The red field of the flag symbolized fortitude and valiance. Sun with rays symbolized peace and fortune. Tunduk shows our motherland, in a deep meaning of universe, consolidation, nomadic heritage, peace, and harmony. 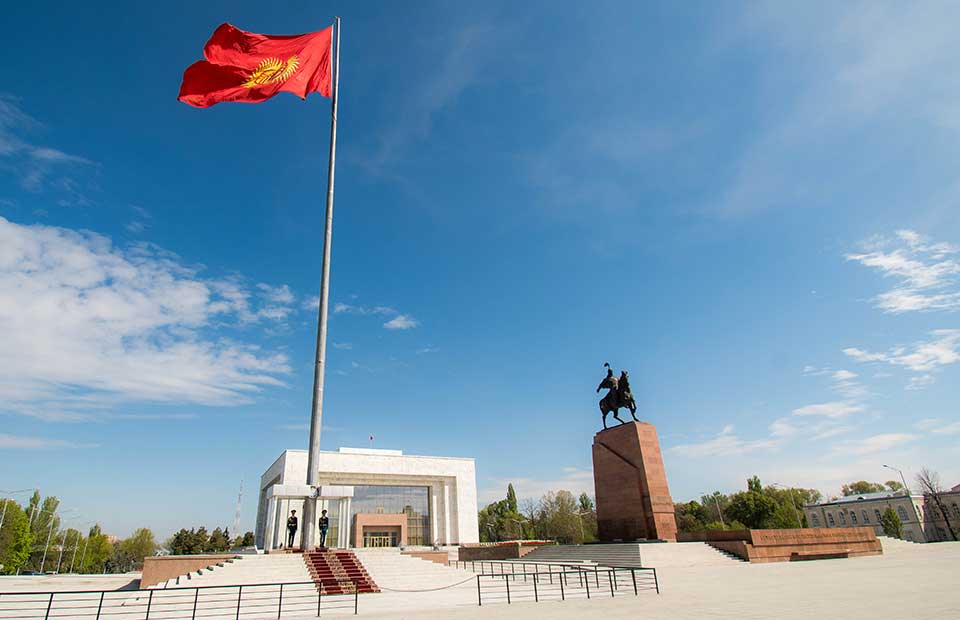 State contest and commission for choosing Kyrgyz Flag were in 1992-1994, after the Kyrgyz Republic Independence claim. Finally, there were registered more than 400 sketches.  The Decree of the Kyrgyz Republic #91, from the 17th of July 2004 affirmed a new symbol of the country.
The first symbols devoted to Kyrgyz tribes found at Bulgarian Chronicles. It says pennant of ancient Kyrgyz ornamented with ribbons; on the top of the gad red colored felt was fixed, as a symbol of the red snake with the wings written there. Therefore that information confirmed at “Divani Lugat-at-Turk” by Mahmud Kashgari, 11th century.

Heraldic symbols and colors of every tribe distinguished. According to the “Sanjyra” (Kyrgyz tribes’ history and genealogical division). There are three big groups of Kyrgyz Tribes.  These are the Right Wing (blue-colored flag), Left Wing (white-colored flag), and Inner Tribes (red-colored flag). However, according to the Manas Epic (Kyrgyz epic poem, explaining episodic historical events, 40 Kyrgyz tribes uniting idea) main hero Manas had a red-colored pennant.

The Sun with 40 rays. The Sun is one of the ancient natural symbols. All are devoted to the Sun at the Universe.  The Sun is a symbol of life, sacral energy, and eternal life.  The light of the sun is a symbol of the source of light, truth, knowledge, and intelligence.  Grace is given by the Sun.  40 Rays – symbolized the unity of 40 tribes of Kyrgyz. Ethnonym “Kyrgyz” coming from Turkic words –  kyrk – forty and adding of the suffix -iz, yz – plural form, meaning “a collection of forty tribes”.

Yurt (“Boz-Ui” – translated as grey home) – the symbol of Kyrgyz nomadic life. Yurt is a top nomad architect, the universe, life, and philosophy of nomads. Roundtop of the yurt similar to Sun and Moon – Tunduk – joined all within the yurt and only one “window” to the Universe, showing the way to space, world and life. This is the symbol of family, the continuation of life and peace.

Red color has a deep sacral meaning for ancient Kyrgyz. Color of fire, sun, energy, and life. Maybe red color threatened by blood, however, Kyrgyz explained it as the beginning of life. Certainly, red-colored clothes and accessories widely used in everyday life to protect from the evil eye, a sign of good luck and support.

Kyrgyzstan people are the wealth of the country. All countries are [...]

Traditions in Kyrgyzstan: Birth of a child

Traditions in Kyrgyzstan are the belief and behavior having a special [...]