The Kyrgyz Republic – formal name of the country, situated at the heart of the Central Asia. Kyrgyzstan tourism became very popular recently. Our mountainous country bordered by Kazakhstan on the north, Uzbekistan on the west and southwest, Tajikistan on the southwest, China on the east. Kyrgyzstan is sometimes misspelled as Kirgizistan, Kirghizia. Kyrgyzstan capital is Bishkek town, the largest city of the country. Kyrgyz derivate from Turkic work “kyrk” – forty, litteral translation – “we are forty”. Manas epic told the story of joining 40 kyrgyz tribes by main hero Manas.

Kyrgyzstan is popular by Kyrgyzstan mountains, Kyrgyzstan ranges – Celestial Mountains – The Tien-Shan.  Kyrgyzstan tourism is developing very fast in last decade, that is due to the rich natural and cultural heritage, historical crossroad on the path of the Great Silk Road and Soviet Union period of the country. UNESCO/UNWTO Silk Road Heritage Corridor – Chang’an-Tien-Shan was passing by the territory of the Kyrgyz Republic.  Kyrgyzstan having more than 80 ethnics –  it is a mosaic and country of interest in wide spheres of life. Kyrgyzstan travel could be interesting outcome from the variety of destinations. Kyrgyzstan accept visa free regime. Time in Kyrgyzstan moves very fast, different places, people, scenery, nature.

At the middle of IX century on the ruins of Uyghur Khaganate, there was upraise of Kyrgyz tribes, joined into Kyrgyz Khaganate, strong and rich Khanate with big territory from Guligani (Baikal) till Tibet, whole territory of Gelolu (Seven rivers) modern Central Asia territory. They had strong political structure – with Ajo at the head (Kagan or Khan) with 20 Beks (Ministers) and 15 clerks for clerical work, taxes, finance and law. By the end of Kyrgyz Khaganate, era of Turkic domination at Eurasia changed by domination of Mongol tribes. Kyrgyz tribes were overrun by Mongols, Qing Dynasty and Kokand Khanate. At the end of 19th century Russian Empire came to Kyrgyz land. At 1936 was established Kyrgyz Soviet Socialistic Republic and became part of the Soviet Union. During that period was changes in cultural, educational and social life. Due to the political changes at USSR and strong believe to be independent state, the Kyrgyz Republic declared independence from the Soviet Union at 31st of August 1991. New history of Independent Kyrgyzstan started.

Population of the Kyrgyz Republic is about 6,200,000. This population is equivalent to 0.08% total world population and ranks number 111 in the list of countries by population. The population density in Kyrgyzstan is 32 per km2.

Total land area is 191,800 km2. 35,6% of population is urban. The median age in Kyrgyzstan is 25,5 years. The largest ethnic group is Kyrgyz – 73,3%.  Other big ethnic groups are Uzbek – 14,7%, Russian – 5,5%, others – 6,4%.  There are over 80 ethnicities in Kyrgyzstan – Dungans, Uygurs, Tajiks, Kazakh, Ukrainians, Kurds and Germans, etc.  During the Soviet times, Russian also took the majority of nationalities in Kyrgyzstan, in 1959 Russian kept more than 30% of the population.  After Independence most of the ethnic Russian moved to Russia. Most of the Tajik and Uzbek minorities located at the Southern part of the Kyrgyzstan, because during the USSR, there was no strict borders and neighboring country citizens can move slightly on the border areas. Dungans – Chinese Muslims and Uygurs mostly moved up from Chinese side and mostly settled down in Issyk-Kul, Naryn and Chuy regions. Multinational population of Kyrgyzstan is a richness of the country, with different cultures, languages, confession and background, nevertheless today they are united in one country, being the smalt of the mosaic.

Bishkek is the capital of the Kyrgyz Republic. Its political, economic and cultural center. Bishkek located at Chuy region, at the slopes of the Kyrgyz Range, at about 700-900 meters above sea level, 25 km near to the Kazakh Border. Bishkek to Almaty takes 250 km, 3 hours of driving. Total territory of the town is 127 km2, territory with nearby villages and areas is about 200 km2.  Total population of the town is about 1,000,000 people.

First archeological signs dated from V-IV c. BC were found at the current territory of Bishkek town. Chui valley was advantageous and favorable stop on the Great Silk Road. Ancient settlement of Djiul (VII-XII centuries) was located at the Northern part of the town, till our days’ people call it Kuznechnaya krepost – “forge fortress”, because of the densely populated area of handicrafts, artisans and merchants. In 1825 there was settlement of Pishpek, organized by Madali Khan from Kokand Khanid. Two times Pishpek citadel attacked and destroyed by Russian troops. Later on there was organized bazaar and settlement, at 1878 Pishpek became town. In 1924 here arrived Check and Slovak cooperative “Interghelpo”, they built up town and Pishpek became administrative center of Kyrgyz Autonomic Country. In 1926 town renamed into Frunze, named after Mikhail Vasilievich Frunze – revolutionary, soviet military and statesman, head of Red Army of the Soviets. In 1936 – Frunze is a capital of Kyrgyz Soviet Republic. In 1991 after the Independence town was renamed to its historical name Bishkek.

Main official language is Kyrgyz (Turkic language of Kipchak branch) from 1991. In 1997 Russian language was adopted as an official language.  Kyrgyz written in the Arabic alphabet until the 20th century. In Latin scripts was written from 1928 till 1941.  From that period Kyrgyz language is in Cyrillic script. According to the last notes 4,1 million people spoke Kyrgyz and 2,5 million spoke Russian.

Islam is a dominant religion of the Kyrgyzstan – about 80% – non-denominational Muslims, 17% followers of Russian Orthodoxy, 3% other religions. During the Soviet time the strong believe in atheism was greeted. Strong believe of nomads – Tengrizm- characterised by shamanism, totemism and ancestors worship was popular among the people. Tengri – is an eternal blue sky, heaven and holy spirit of the sky, Father kept people from disasters and kept people alive. Umai Ene – is a Mother – goodness of fertility. That kind of thoughts and believes helped people to live in severe climate and geographical conditions to stay alive and kept up for centuries. Till these days small part of this cult used in everyday life, keep up from the bed eye with the smoke of a juniper and bowl of the clean water. That is another big world of Kyrgyz believes.

Kyrgyzstan is unitary parliamentary republic. Parliament called – Jogorku Kenesh; the head of the state – the President; the head of the Government is the Prime Minister. Juridical system – Supreme Court, Local Courts and Chief Prosecutor. Kyrgyzstan is the only country in the Central Asia and among the CIS countries so frequently changes Presidents. Ex-presidents Akaev A., Bakiev K. were replaced by large-scaled protests of people and opposition upraised against non-democratic and dishonest rule of both of them. Roza Otunbaeva was announced as interim president, after that elections won by Atambaev A. Since 2017 Jeenbekov Sooronbay, won the election and became current President of the Kyrgyz Republic.

Kyrgyzstan is divided into seven regions (oblast). There are 2 main cities – Bishkek and Osh. They are administratively independent and have a status equal to the regions. There are regions: Batken Oblast, Chui Oblast, Issyk-Kul Oblast, Naryn Oblast, Talas Oblast, Jalal-Abad Oblast, Osh Oblast. Tourism in Kyrgyzstan regions is one of the best highlight, during your stay in our country.

The Kyrgyz Som (KGS) is an official national currency. It divides into 100 tyiyn (coins). Banknotes are in denomination 20, 50,100,200,500,1000,2000,5000. Coins are in denomination of 1,3,5 and 10 soms. The 1 som is the smallest unit of the national currency. Every banknote bill had a features of famous people portraits, main geographical and heritage sites, architects and musical instruments. Kyrgyzstan is mostly cash based- economy. But now possible to find in ever town and big village ATM Machines with possibility to withdraw from VisaCard, MasterCard, etc. Banks and exchange offices could be founs in every town and village. National Bank officially fixed the exchanges rates.   http://www.nbkr.kg/ 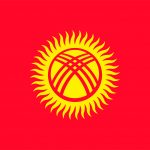 The Flag features of yellow Tunduk inside of the 40 rays of sun on the red ground.

The Emblem features a hawk beating a wings in from of the Tien-Shan Mountains, Issyk-Kul lake and rising sun.  With wheat and cotton covered round with the sigh The Kyrgyz Republic.

Dreaming up to Lake Song-Kol…

Dreaming up to Lake Song-Kol. A horseback-riding experience. We are [...]

Traditions in Kyrgyzstan: Birth of a child

Traditions in Kyrgyzstan are the belief and behavior having a special [...]